On Wednesday, February 21, an assembly was presented in honor of Black History Month.  The assembly was entitled “Rosa Louise McCauly Park – the Spark for the Civil Rights Movement.”

This wonderful presentation included actress/historical presenter Scottie Davis who portrayed the life of Rosa Parks from a young woman up until the days before and after the bus boycott.  Also participating were fifth grade students Rik, Brandon, Ben, Lisa, Kobi, Gabrielle, Orli, Alia, Ethan, Guy, and Kennedi. 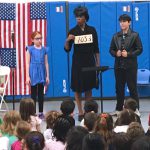 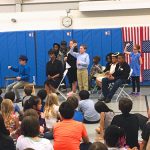 The performance included acting and singing as well as audience participation with songs such as We Shall Overcome and Ain’t Gonna Let Nobody Turn Me Around.  We all enjoyed the assembly and were once again reminded of the struggles of the people during the Civil Rights movement as well as what courage looks like.

The assembly was part of an arts initiative with Arts Horizons, a company that strongly believes in the power of arts in education.